spotifyr is an R wrapper for pulling track audio features and other information from Spotify’s Web API in bulk. By automatically batching API requests, it allows you to enter an artist’s name and retrieve their entire discography in seconds, along with Spotify’s audio features and track/album popularity metrics. You can also pull song and playlist information for a given Spotify User (including yourself!).

First, set up a Dev account with Spotify to access their Web API here. This will give you your Client ID and Client Secret. Once you have those, you can pull your access token into R with get_spotify_access_token().

The easiest way to authenticate is to set your credentials to the System Environment variables SPOTIFY_CLIENT_ID and SPOTIFY_CLIENT_SECRET. The default arguments to get_spotify_access_token() (and all other functions in this package) will refer to those. Alternatively, you can set them manually and make sure to explicitly refer to your access token in each subsequent function call.

For certain functions and applications, you’ll need to log in as a Spotify user. To do this, your Spotify Developer application needs to have a callback url. You can set this to whatever you want that will work with your application, but a good default option is http://localhost:1410/ (see image below). For more information on authorization, visit the offical Spotify Developer Guide. 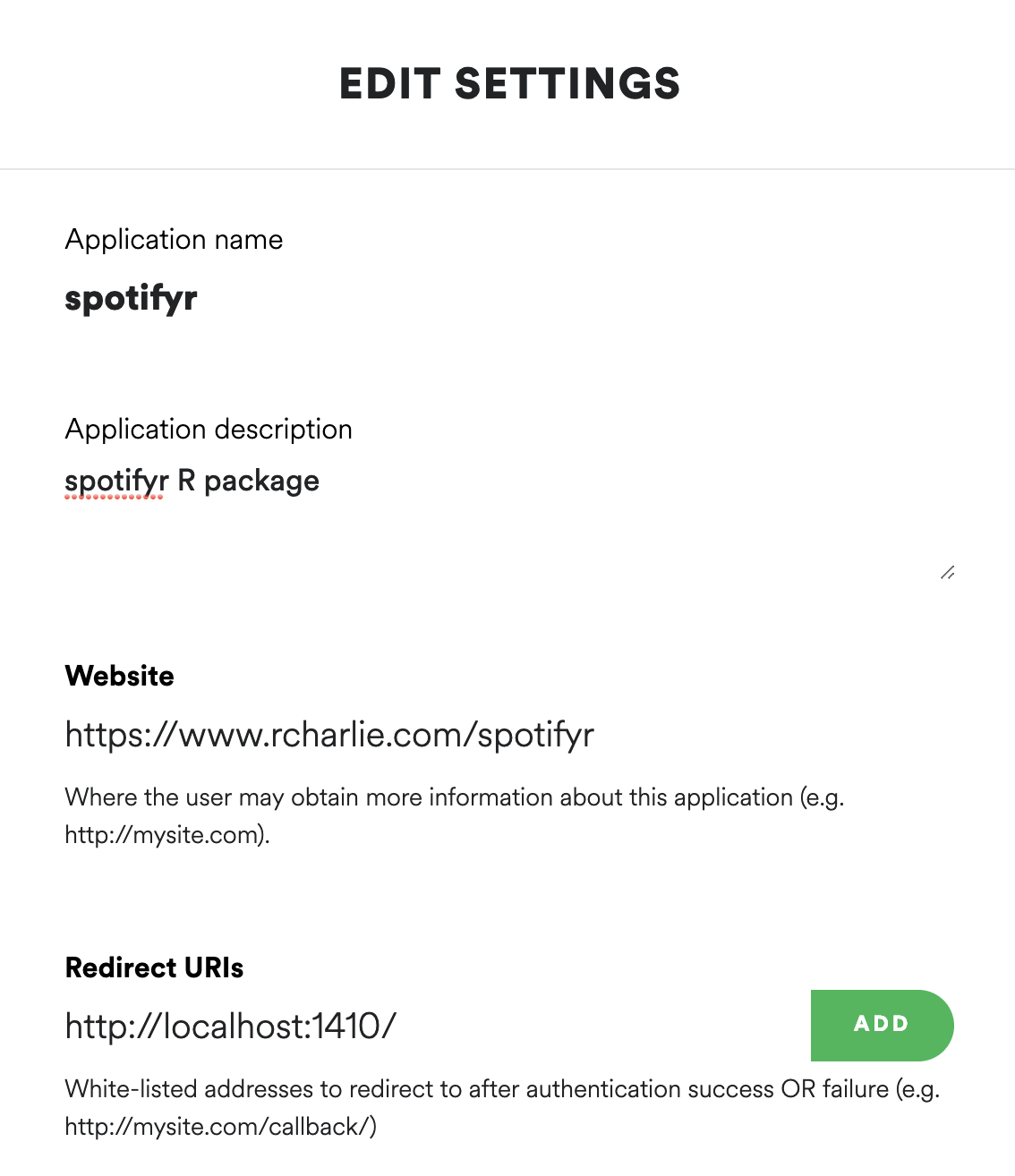 What was The Beatles’ favorite key?

Get your most recently played tracks

Find your all time favorite artists

Find your favorite tracks at the moment

My favorite audio feature has to be “valence,” a measure of musical positivity.

Now if only there was some way to plot joy…

Joyplot of the emotional rollercoasters that are Joy Division’s albums

This app, powered by spotifyr, allows you to visualize the energy and valence (musical positivity) of all of Spotify’s artists and playlists.

Dope stuff other people have done with spotifyr

The coolest thing about making this package has definitely been seeing all the awesome stuff other people have done with it. Here are a few examples:

Exploring the Spotify API with R: A tutorial for beginners, by a beginner, Mia Smith

Blue Christmas: A data-driven search for the most depressing Christmas song, Caitlin Hudon